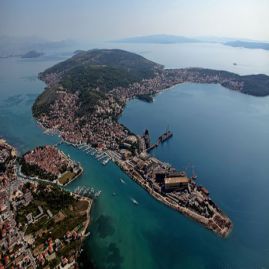 Čiovo - the island in the Adriatic Sea, in the central part of Croatia, near the Dalmatian coast. Ciovo, like the other islands of the Adriatic has been inhabited since ancient times. The island's population has grown strongly in XV-XVI century, when it settled refugees from the areas occupied by the Turks. Another jump in the number of Ciovo occurred later, when the island expanded Trogir. The main attractions of the island - Dominican Monastery of St. Cross of the XV century; Church and Monastery of the Virgin Mary in Prizidnitse, are the subject of a religious pilgrimage; the r...