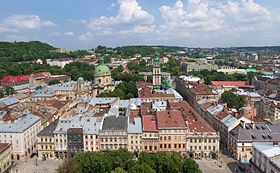 Lviv - a city of regional subordination in Ukraine, the regional center of the Lviv region, national-cultural, educational and scientific center, a major industrial center and transportation hub. Lviv was founded Galician Prince Daniel Romanovich in the middle of the XIII century. The historic center of Lviv structure belonging to the UNESCO World Heritage List. The city has the largest number of monuments in Ukraine. In 2009 Lviv was awarded the title of Cultural capital of Ukraine.